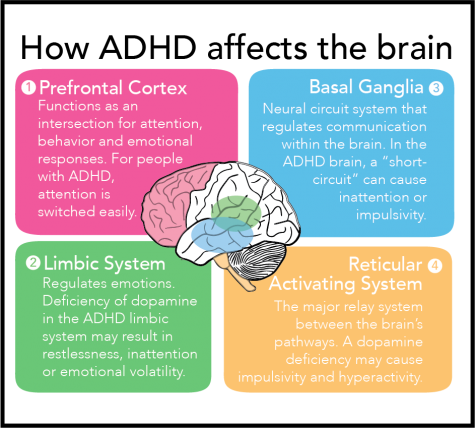 There are many people around the world who do not understand what ADHD is. Its symptoms and presentations can be misunderstood as someone was lazy. Other times, people will outright deny its existence whatsoever. ADHD is not a trend, it’s not something one uses as a crutch. It is a neurological disorder that affects millions of children and adults around the world.

In 2021, I was diagnosed with ADHD (Attention-Deficit Hyperactivity Disorder). There are three different types of this disorder. They are:

I was diagnosed with being Predominantly Inattentive.

Having this type of ADHD, I mainly struggle with executive dysfunction. This sort of dysfunction means that “the brain has a hard time with the skills of attention, memory, flexible thinking, and organization/time management.”

I struggle with these kind of issues every single day. It can be taxing on my mental health.

Take for example organization/time management. Often times, there are countless things I have to do during the course of a day. If those tasks aren’t organized properly, say with a list, I’ll be bouncing around doing different tasks, and not much will actually get done. With a list, it’s easier to focus on one specific task at a time. Time management also comes into play here. If I’m unable to schedule specific tasks for the day, everything goes haywire.

The attention span for someone with ADHD can be all over the place, especially when it comes to listening to someone speak.

For instance, if someone were talking to me while I was focused on something else, the words the person is saying will not penetrate my brain and memory.

Sure, I can hear them speaking, but nothing is actually being absorbed.

Memory can be a major issue associated with ADHD. I may not be able to recall something you told me 30 minutes ago, but without fail, I can tell you some random fact like the mitochondria is the powerhouse of the cell, or that the capital of New York is Albany.

As someone who suffers from both Anxiety and ADHD, mental health awareness is something dear to my heart. In this society, mental health can be stigmatized. It can be belittled like its something that makes no difference. The fact of the matter is that the ADHD brain was not built for the “normal” society in which we live in, which is why so many of us struggle trying to “fit in”. With the right awareness, and if necessary medication and accommodations, people with ADHD can thrive in a society that wasn’t built for us.